The Hindu community of the UK has been continuously shocked by the persecution of Hindus in Pakistan and has started lobbying the British government to ensure the safety and basic human rights for Pakistani Hindus. Recent incident of arresting an eight-year-old Hindu boy under blasphemy laws shocked the whole world. It meant that this eight-year-old Hindu boy could face execution. Although these outrageous charges are dropped by the Prime Minister of Pakistan after global uproar, the boy and his family are believed to be in police custody due to threats issued by Islamist extremists in Pakistan. Around 200 Hindu families in the same town of the boy were threatened to leave their houses overnight are yet to return.

This has shaken up the British Hindus further and a peaceful protest outside the Pakistani embassy was organised on Sunday 15th August 2021 which was attended by around 500 people. Multiple Hindu organisations, including INSIGHT UK, a social movement for British Hindus and Indians, mobilised to organise the protest.

Since partition in 1947, the minority Hindu community in Pakistan has been treated like second class citizens and suffered decades of persecution. Over 5,000 Hindus leave Pakistan for India each year to escape. An estimated 1,000 Hindu girls are abducted and forcefully converted to Islam each year, married off to their abductors who are often old enough to be their father. There were over 400 temples in Pakistan just 40 years ago, now there are just 20, the rest having been destroyed. The Hindu population in Pakistan is believed to be 2.14% in 2017 which shows sharp decline from approximately 22% in 1947.

The trigger which prompted this protest was an eight-year-old boy who had unknowingly wandered into a Madrassah (Muslim place of learning). He was threateningly confronted by a man, and in his fear, he urinated. The Pakistani police believed this was a ‘crime’ and the boy was arrested for blasphemy, put in prison, with no contact with his family. Blasphemy carries the death penalty in Pakistan. Even more disturbingly, vigilante crowds often don’t wait for legal justice and take the law into their hands, lynching the alleged ‘criminals’. On this occasion after hearing of the alleged blasphemous incident, the crowd of local Muslims destroyed a temple in the same district, damaging the building and the Murtis (Hindu religious holy shrines) situated within.

The protest was a huge success and with just a few days to plan, around 500 people attended to raise their voices. Educational speeches were given expressing the plight of the Pakistani Hindus, slogans of peace were chanted, and signs were held. This peaceful protest was livestreamed via many social media channels. We hope wider awareness was raised to the general public about what is happening in Pakistan, and although the protest was a success, this is just the start. We cannot rest whilst the innocent Hindus of Pakistan are attacked, raped, and forcefully converted, all under the watch of the Pakistani and British governments. Their voices will be heard.

INSIGHT UK will be launching a series of events on this matter including an awareness campaign for the Members of UK Parliament (MPs) soon.

Photos of the protest:

Interview at the protest site: 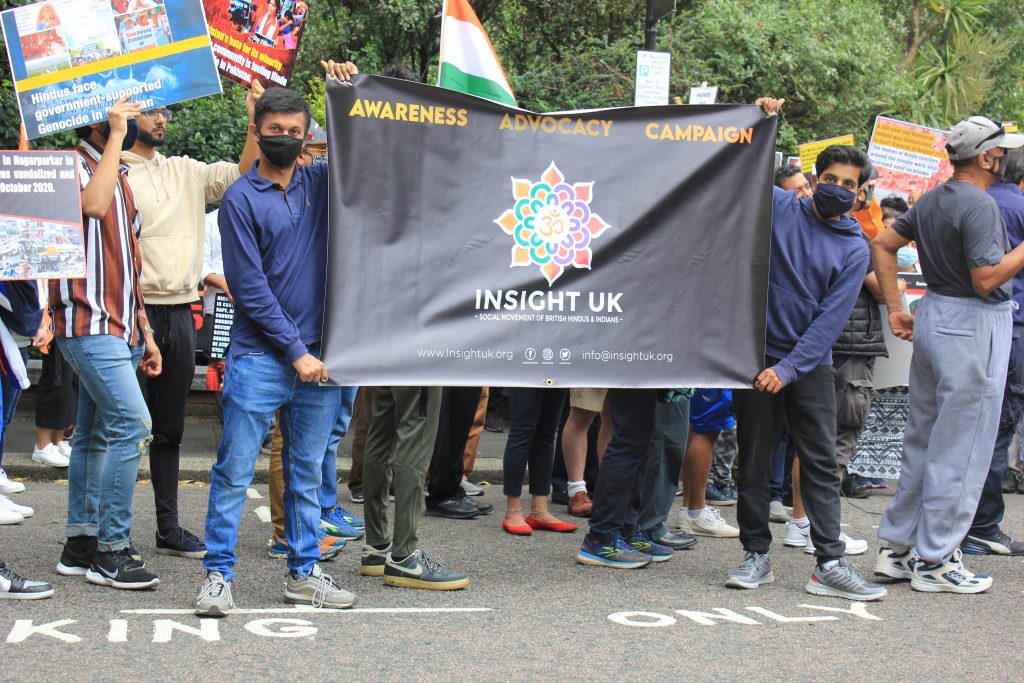 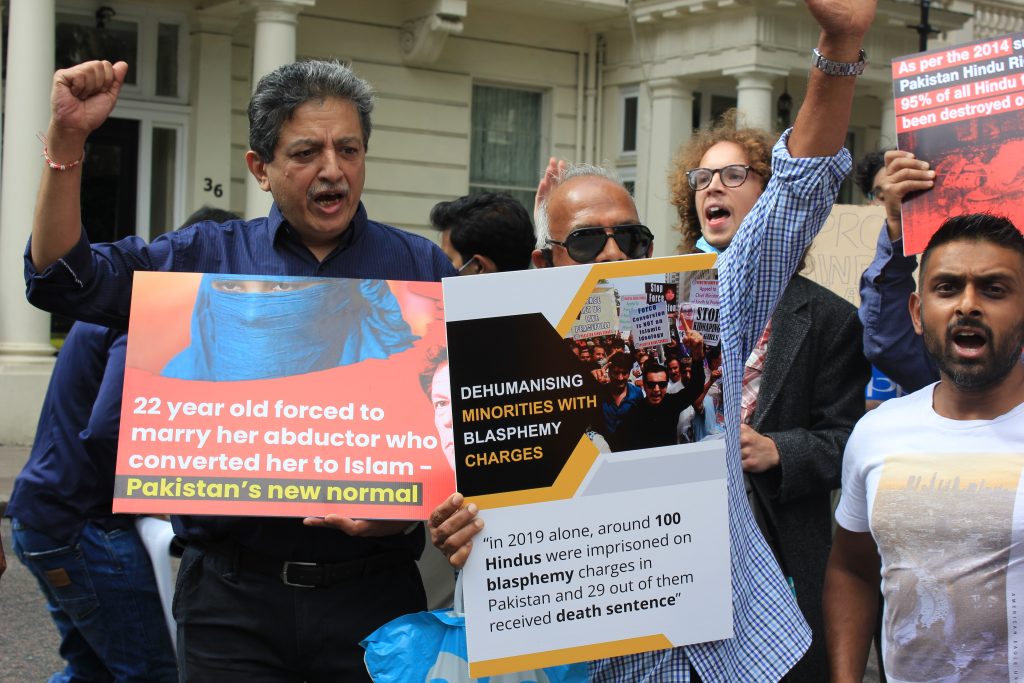 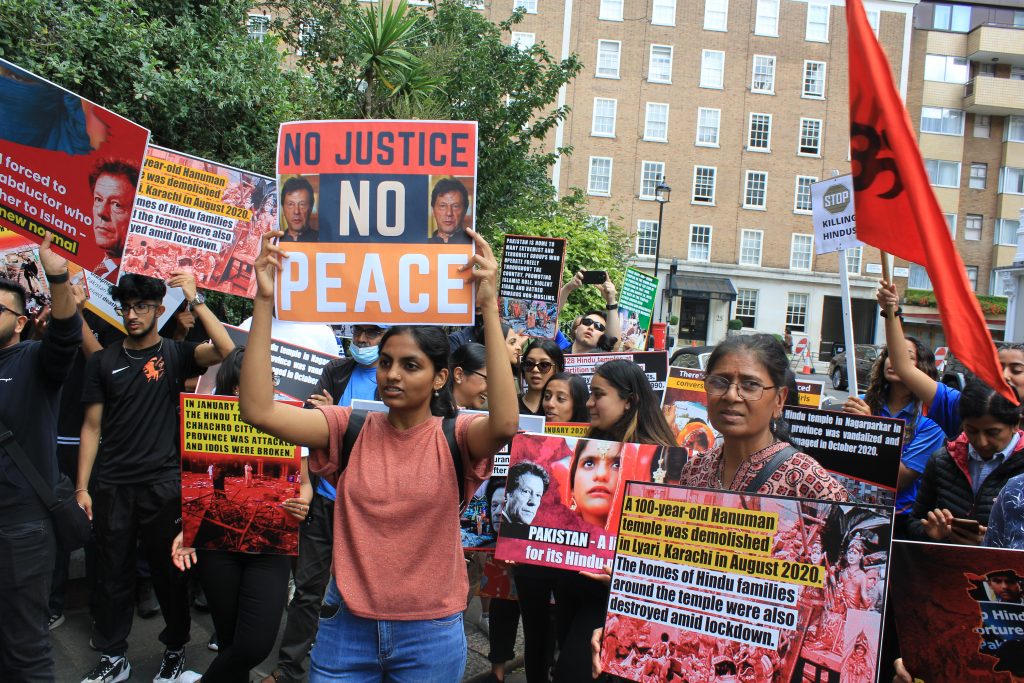 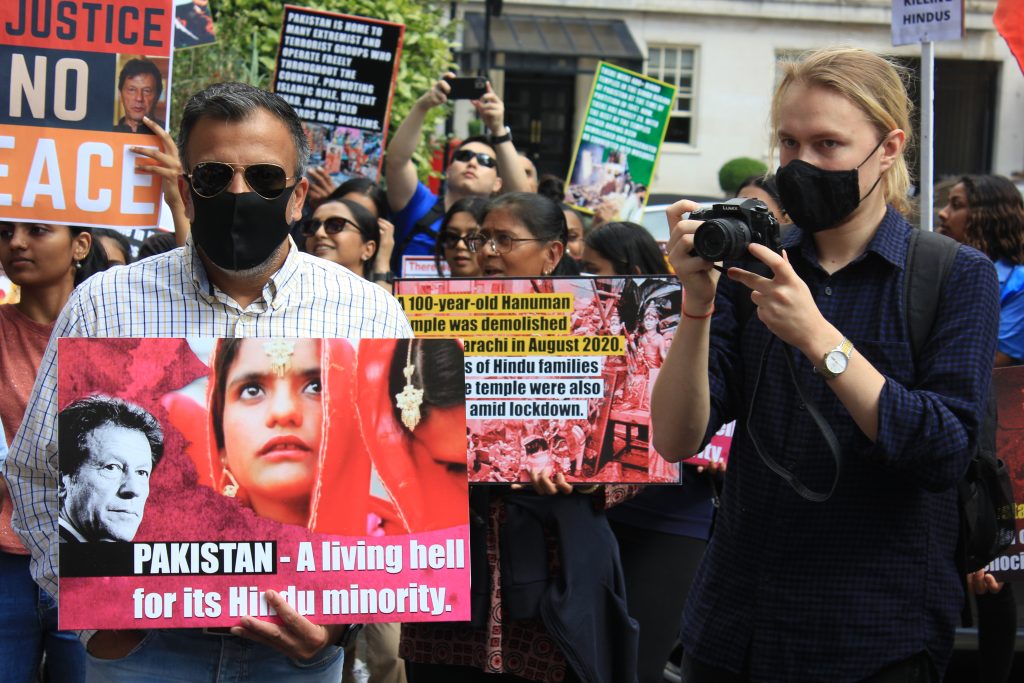