The provocative and divisive documentary with little legal credibility ignores the fact that India is the world’s largest democracy in the world with one of the fastest growing economies and the country’s Supreme Court after lengthy investigations and due process has completely absolved Prime Minister Narendra Modi of allegations of complicity in the 2002 riots. BBC not only disregards India’s democratic institutions but also forgets that PM Modi is a democratically elected leader, whose party BJP (Bhartiya Janata Party) under his leadership has won the general elections twice with a landslide victory. PM Modi’s government is credited for large scale social and financial inclusions programmes which have befitted millions in India irrespective of their religion, caste, gender or region.

BBC’s documentary based on flimsy grounds and discredited testimonies is raking up the issue two decades later. The documentary has sparked a global outrage and BBC has been accused of escalating tensions between communities based on an agenda driven and manufactured narrative. In a globalised world and because of the broadcaster’s worldwide presence, the implications of such sinister propaganda will be far reaching.  Concerned that this act of BBC deliberately misinforming its viewers and blaming Hindus could further worsen relations and disturb peace in UK’s plural and multi-cultural society, many prominent individuals and Hindu organizations in UK have condemned and questioned the BBC and called for an independent probe against it for serious breach of its duties as a broadcaster.

BBC’s two-part documentary titled India: The Modi Question, has been strongly condemned for not meeting the highest standards of editorial impartiality. Contrary to claims by BBC that the documentary is a rigorously researched piece that examines the 2002 riots and Hindu-Muslim tensions during Indian Prime Minister Narendra Modi’s tenure as the Chief Minister of Gujarat, the contents and timing of the documentary presented, reflect a bias and malafide intentions. BBC a repeat offender, has flouted its own charter and impartiality guidelines multiple times. It has been investigated and found guilty of the same by the regulatory body Ofcom.

Sign the Petition: Call for an Independent Investigation into the BBC over Modi documentary 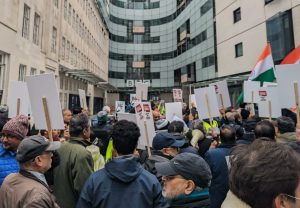 Reacting to the continued bias and propaganda against India, Hindus and PM Modi and the latest biassed reporting and propaganda-driven documentary by the BBC, the British Indian diaspora organised a nationwide protest against the corporation on Sunday 29th January at 12 noon.

A step-by-step guide to complaining to the BBC.

British Indian diaspora protest outside BBC headquarters across the UK

What others have said

Condemnation of the BBC's unwarranted attack on India, Hindus and PM Narendra Modi

I was shocked by the documentary produced by the BBC implicating the Hon. Prime Minister of India in the Gujarat riots of 2002 which aired on 17″ January 2023.

MP Bob Blackman speaking to Time Now. Calls the BBC documentary poorly researched, full of innuendos, and downplaying vital facts about the Gujarat riots. He adds that the documentary attacks PM Modi, is dismissive of the Supreme Court verdict and may adversely affect India-UK relations.

“I am appalled by the documentary produced by the BBC implicating the Hon. Prime Minister of India in the Gujarat riots of 2002 aired on 17™ January 2023. The producer has shown a lack of vision, common sense and judgement by producing such an insensitive one-sided documentary.”

“As you are aware that the BBC’s documentary has caused a lot of anguish and disappointment amongst British Hindus as it tried to create a negative narrative based on biased opinions and inputs and thus trying to establish a conclusion that’s far from the truth.”

Hindu Forum Of Britain Expresses Disgust And Disappointment At The BBC

Hindu Forum of Britain (HFB) and its members express their disgust and disappointment at the level of anti-Hindu bias and partiality the BBC has sunk to.

PM Modi is one of the most powerful persons on the planet: Lord Karan Bilimoria.

Francois Gautier | BBC: Voice Of The World Or Voice Of Slander

Once upon a time, the BBC was the voice of the World. I remember, as a young journalist covering India, that we all listened to the BBC radio, as we knew that it was more truthful than All India Radio or DoorDarshan. Indeed when Indira Gandhi was assassinated, it was the BBC that first broke the news.